The easy way of learning how to built your own Line follower Robot using a PID Controller without any of the mathematical expressions that you will find on most tutorials. Code included!

The first thing you have thought about after unboxing your LEGO Mindstorms was building the first robot, and just after that you would love to make it follow lines, isn’t it? 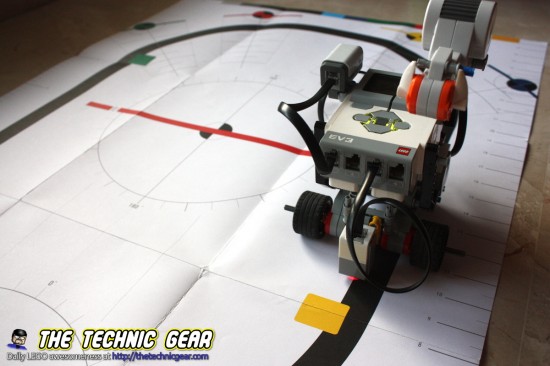 There are several ways of making a Line Follower, the one that I am going to explain you about is using the Light sensor. As you know, both Mindstorms and EV3 sets come with a little light sensor that it is able to get a reading of reflected light, apart of seeing colors. On this tutorial I will explain how to do line following with just one sensor. The more sensors you have the better and faster the robot will be able to follow it.

So first thing is build yourself a little robot much like Track3r, either with wheels or with tracks. You can download the instructions provided by LEGO. It is a simple construction. 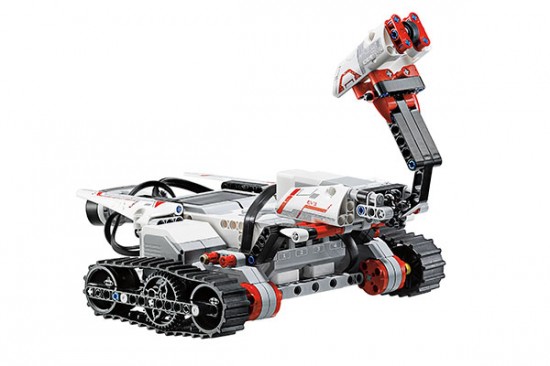 Or base it on one of the LEGO Education models… 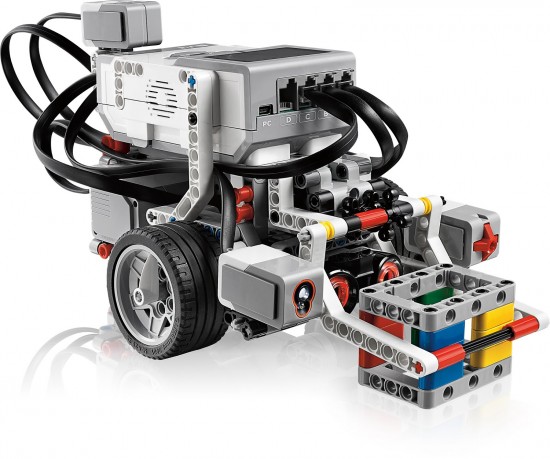 Whatever you build, just try to keep the distance between wheels to a minimum… because the bigger the distance, the harder for the robot to follow the turns on the line.

Ok, ready? Time to code. Let me explain how we get to the “best” solution with a serie of intermediate steps that will help you understand it better.

Building your playground for line following

Ok, the robot is done. But before start coding, we need the line that the robot will follow. If you happen to have the Mindstorms NXT 2.0 it has a mat with a big elipse-like line that works great for this tasks.

But if you don’t just do like me. I have used a black tape and with the finger I have sticked it to the floor creating a continuous path that the robot will follow. You don’t need a closed loop ( although it is a good idea to do it in that way ).
My floor is done of marble that it is white and brown at times and even with that it works. So it may work too on yours unless it has even less contrast than mine.

No, serious, we don’t follow the line but its border in what it is called left-hand approach. 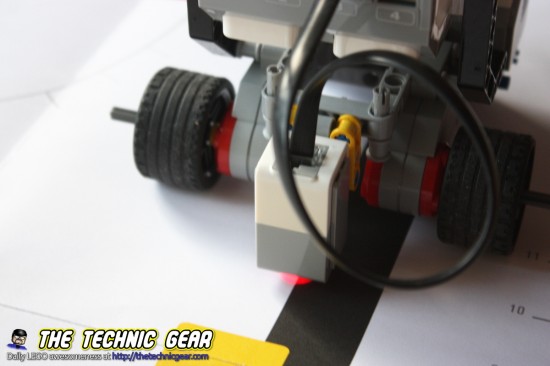 So, next step is defining what it is black and what it is white. I hope you have a clear idea of what these two colors are, but unfortunatelly your robot don’t. So the best thing you can do, before starting anything else is calibrate the robot.

Ok, as you know Color sensor can also work as a Light sensor, so we choose the Measure reflected light mode and we are going to store in two variables the white and black colors.

The reflected light value is just a number between 0 and 100 with the amount of light the sensor is getting back.

So the pseudocode would be

Do you get the idea? We add a Touch sensor to our Robot to record the light value, you can also do it using Brick buttons, as you prefer.
Here is the EV3 code that I used for it

I do it each time I start the robot but you can safely ignore it while light conditions keep stable.

Let’s think first what we are going to do. Let’s start with the simplest possible way ( and perhaps the worse ) of doing line following.

We place the robot on the line, we get a reading if it below the middle ( black-white ) we move to one side and if it is above we move to the other side. Simple? Clever?

The idea is pretty simple just make one wheel turns faster than the other. Here it is how it works.

Here is the EV3 program 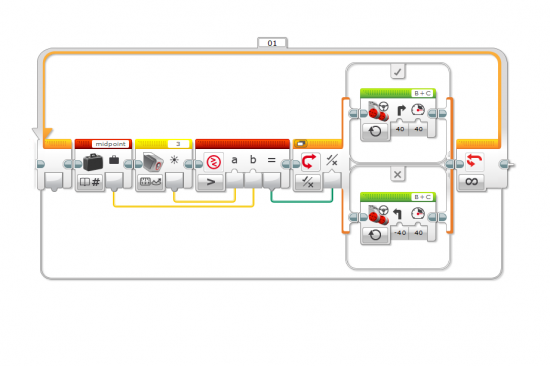 Does it works? Well... it does... to some point. If the corner is step enough the robot will miss it and as you can see it is missing the straight line and it starts oscillating around it.

Why? Because we have only two states, so the robot is either turning left or turning right. What can we do? Exactly... add an extra state to make it go straight. So we have left, straight and right... so if we want to improve it even more we could add even more states, far left, left, a bit left, straight, a bit right, right, far right, and so on...

So why not make the turn proportional to the error, the difference between the midpoint and the value read.

Line Following with a P Controller

Do you like Maths? I don't. I have a deep understanding of them but I really can't stand the complex way of explaining simple things... so let me explain you the P Controller without any kind of mathematical notations.

If you follow the reasoning of the On/Off controller with several states you may end up thinking of a controller with infinite states, each one of them with an value proportional to the error, the difference between where we want the robot to be and where it really is.

Where K is a constant that helps us tune the P controller. The bigger Kp is the higher will be the turning when there is an error, but if Kp is too big you may find that the robot overreacts and that it is uncontrollable.

You can watch what happens when you change the value of Kp from 0 to 10 on this video.

So our P-Controller would be like this pseudo code

If you are not using the EV3 module just move one motor a value + correction and the other motor to value - correction. It is pretty much the same.
Here it is the EV3 program

Start with Kp=1 and run your robot. If the robot can't follow the turns on the line then increase Kp, if on the other hand your robot turns violently on the line, decrease the Kp value. The bigger the effect the bigger the change need on Kp. Just keep playing...

The P Controller has two problem that can be "easily" fixed with a complete PID controller: one is that it will oscilate after corrections and the other is that there is a small error that it is a direct result of the P Controller.

Line Following with a PID Controller

A PID controller is basically a P controller with two other components, the integral part and the derivative part.

Don't be scared. Let me explain the overall idea and we move to the pseudo code.

Proportional part of the PID Controller

This is exactly the part that have just seen above.

Integral part of the PID Controller

The idea behind the integral part is that the error must tend to zero over a period of time. I will avoid you a very ugly mathematical expression explaining this... but keep in mind that as you are working inside a loop we can write

So over a number of interation we want this to be zero. Why? Because we want to correct the error, so the only way of the robot being exactly over the midpoint between black and white is that this part of the PID controller is zero too.

Derivative part of the PID Controller

The final part of the PID Controller is the derivative part. If we can think of the integral part as a memory of the controller, the derivative part is like an economist that watch the future and try to guess it based on past errors.

So if we know the last error and we know the actual error we can compute what the next error will be. So the derivative part of the PID controller will help the controller to correct the error faster.

One problem of the derivative part is that it is highly sensible to the noise in the controller signal ( our light detector ) so if the signal is noisy it may not estimate the correct error. And yes, light sensor is quite noisy :)

So this is the pseudocode for this PID controller

And well I won't be a true nerd if I don't show you the crazy mathematical description.

So how good does it works?

So, here it is the EV3 code for the PID controller.

This source code is available free for you under the GNU General Public License 3 which you can read here. Basically, you are free to copy, modify, redistribute it given that you respect these freedoms on the changes you made yourself.
[/sociallocker]

Ok, got it? Now a big problem appears... what are the best values for kp, ki and kd?

How To set kp, ki and kd params in a PID controller

Well... again, I will save you all the mathematical representation of it. So after reading Wikipedia and reading about various approaches, I think the one that best suits our tasks it the heuristics approach.

So copying from Wikipedia: "If the system must remain online, one tuning method is to first set K_i and K_d values to zero. Increase the K_p until the output of the loop oscillates, then the K_p should be set to approximately half of that value for a "quarter amplitude decay" type response. Then increase K_i until any offset is corrected in sufficient time for the process. However, too much K_i will cause instability. Finally, increase K_d, if required, until the loop is acceptably quick to reach its reference after a load disturbance.

However, too much K_d will cause excessive response and overshoot. A fast PID loop tuning usually overshoots slightly to reach the setpoint more quickly; however, some systems cannot accept overshoot, in which case an over-damped closed-loop system is required, which will require a K_p setting significantly less than half that of the K_p setting that was causing oscillation."

Got it? No problem, I am here to help you.

Just set Kd and Ki to 0. Set Kp to 1 and run your robot. Does it follow the line smoothly? No, try decreasing it by a half? Can it still follow the line? No, increase it a bit... keep changing until you have the robot following a straight line without oscillations.

Then increase Ki a bit and check if it is smoother? Yes, increase a bit more... does it works worse... so a bit less...

Finally set Kd to 1 and check how fast the robot follows now the line? Too unstable, decrease it...
Keep repeating until you are happy.

One video is more than enough to see it :)

As a final word, you now need to know that each kind of line require a Kp, Ki and Kd params tunning to get the best of the robot.

That's all folks.
Hope you enjoyed the tutorial as much as I did. Don't miss my post about a self-balancing robot that I built using a gyro sensor I have just got from LEGO. Did you know that I run a Youtube channel with almost daily LEGO reviews and HOWTO? Please subscribe to The Technic Gear LEGO Reviews

This source code is available free for you under the GNU General Public License 3 which you can read here. Basically, you are free to copy, modify, redistribute it given that you respect these freedoms on the changes you made yourself.
[/sociallocker]