After watching the little race car by NXT Programs I decided that I had to build that one. This Race Car is built using the standard parts of Mindstorms set. 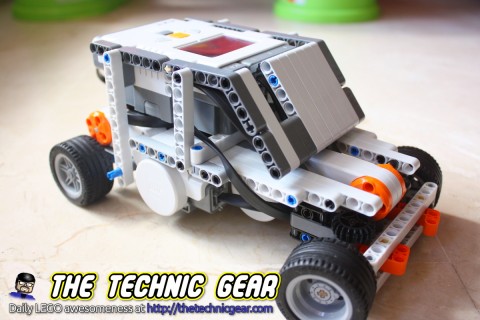 As you can see aspect isn’t completely finished and well, the one at NXT Programs looks slightly better. I did on the other hand a tune so I can upload programs to the NXT Brick using USB.

The car is fairly easy to build just with the parts supplied at LEGO Mindstorms 8547 Set. So I launched building it and just skipped the external look part.

I wrote just two small programs for the Race car.

Find the line and speed up

First program is a very simple one, the race car will move forward at 50% of the motor power until it finds the black line. Then it will accelerate to 100% Power for 3 seconds and coast.

The program as you see is quite simple but it has two big problems. By design there is no easy way of knowing if the car is going straight or not, and as you can see on the video, a small error on direction means that the car will crash against a wall.

Also, the car can’t detect if it has collided against a wall and so stop the motors. This is an easy to fix feature. We can either add a press sensor on the front of the car bumper so that when it hits anything the car stop or we can just use a Loop to move the car so that when the motors rotation sensor values don’t change we can suppose that the car has collided.

Ok, the above one was promising but not very impressing, so I decided to give a try to the remote control using the press sensor for the task.

With this one I had the problem that if you steer too much the car the wheel is almost perpendicular to the chassis and the car stops. Checking the code from NXT Programs I saw they limited the amount of degrees that the wheel can turn. #clever 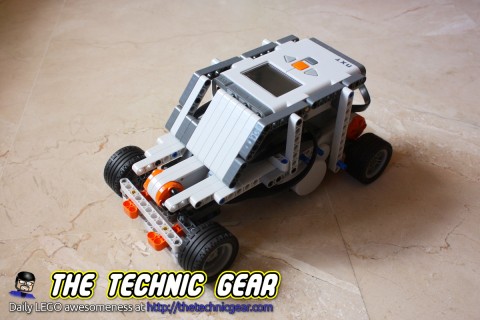 So what I say?! The car is very simple to build, and fun, but I am really dissapointed with the result. With my programs it was really hard to get the car going straight and the remote control wasn’t fun at all.

I was planning to feature a line follower with this model but after checking the results I decided it wasn’t worth the work. My next MOC will do nice line following I promise.