Pong for Mindstorms EV3 is a one player game code using LabView EV3 language that will help you understand the usage of variables, ranges, conditions and multithreading. You just need one LEGO Ev3 Brick, a L-Motor and a big gear to have hours of enjoyment ( but I would better go and buy an Xbox One )

In my way to improve my EV3 coding skills I am doing a series of tests of old classics, like the bouncing ball or this little Pong game. 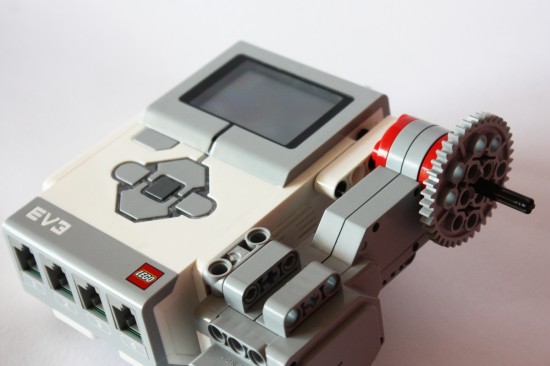 Pong was a game for two players were each of them has a racket that can make a ball bounce on the playfield. The player that was able to pass a ball behind the player racket scores a goal. 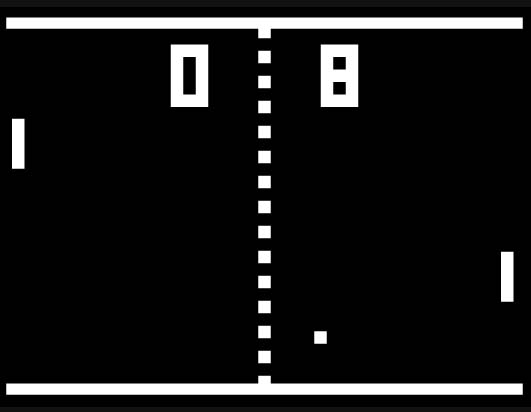 I have coded this 70s classic in EV3 but for a single player. As usual, source code included ( and released as GPL Open Source ).
Here is the video of the game and then I explain you how it was done and the tricky parts on code.

So let’s see the design before talking about code.
I will design the code to be running on three different threads

This thread keeps counting the time, that will be our score.

The Player thread will read the motor rotations and transform it on vertical movements of the player.

And now to understand the next pseudocode I would like to explain a few things. We have two entities in our game:

A ball that has and x,y position and a speed that it is represented by a vector dx,dy. Our ball has also a radius of 5.

A player that has a vertical position y. Our player don't move on the horizontal axis so we don't need to store that value. I have made it fixed at 170 pixels so it is on the end of the screen. The player's racket has a length of 20 pixels.

Then if the ball y is on the same range that the player y to player y + size, that was 20, then we conclude that the ball did in fact collided with the racket and make it bounce.

Well that's pretty much the idea. Just one last tip. Unless you want to kill your EV3 Brick batteries in half and hour you better let the program sleep a bit on the end of each turn... just 70 to 100 milliseconds is enough.

So here is the EV3 code.

This graphical language is nice because it let you hack something for your robot quite fast but it is a pain when you have to use variables.

Here you have the file ready for your EV3 brick. Make sure you run the whole program and not just a thread.

Stand up to the Challenge!

Can you turn this to a two players game? You just need to add a few things, an extra L-motor, the code to read the motor, just another thread working on a different port and maybe the hardest part ( but not hard at all ) the code to check the bounces on the left player's racket.

Now I just need to learn about arrays, files and blue-tooth communication. Keep your eyes peeled for next articles.

13 thoughts on “Playable Pong in a LEGO Mindstorms EV3”